The Shropshir sheep originated in the Shropshire region of England and is one of the traditional lowland breeds. Starting from several local breeds, it developed in the late 19th century and was already characterized by extensive pasture management. 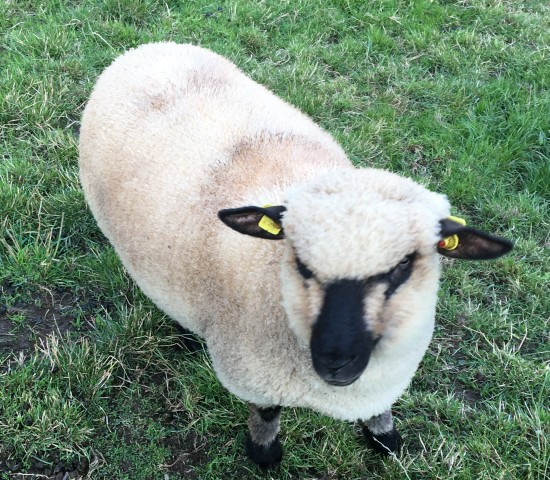 Very quickly found dedicated breeders who bred strictly on the type of Shropshires. This allowed the breeders to successfully unify this breed. Then, in 1883, the herdbook for this breed was established. The Shropshir sheep are widely respected and executed in the early 20th century as purebred animals throughout the world. Today you breed them worldwide, also with us! The number of Shropshir sheep farmers and breeders in Germany is estimated at over 1000 people, farms or families.

The Shropshire sheep is a medium sized, compact sheep. It has a long, deep hull and a wide, straight back with excellent muscling. The distinctive inner and outer legs are fully fleshy. Bucks have a weight of 110 to 140 kg and ewes weigh 90 to 120 kg. Typical for the Shropshireschaf is a willing head, which is more or less pronounced in some. This feature makes them look like a "teddy bear sheep". The on the short, strong neck patched head, and the ears are studded with black Stichelhaaren. They are peaceful, balanced animals with strong, medium-length legs of black color, with tight fetters and strong claws. Due to their great adaptability, the robust animals are increasingly in demand for the cultivation of coniferous trees, fruit meadows and the maintenance of energy wood crops. Even with poor feed supply, they can still perform well due to their good feed utilization. 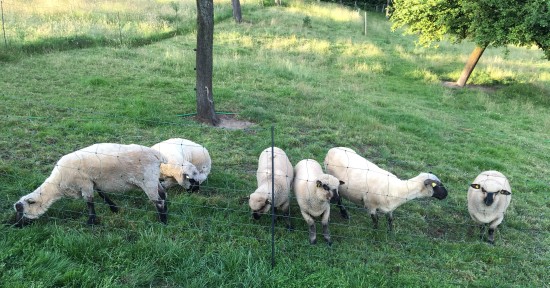 The Shropshir sheep are very fertile and lamb off once a year in the period from January to March. They can give birth to up to three lambs, which is very rare, because mostly two lambs see the daylight. The pronounced motherliness and good milk yield are a guarantee for cheerful lambs. Shropshire lambs have good carcasses with pronounced muscling. They are fast growing and can reach the slaughter maturity after 80-100 days with a live weight of 40-45 kg.

Since Shropshir sheep do not bite both conifers and fruit trees or peel the bark, they are used in many different crops to keep them free of weeds. This ability is due to their innate feeding behavior, because they select fodder plants very selectively. This valuable property is supported by a specially adapted pasture management.

In the early 1990s came in larger quantities Shropshir sheep from Denmark to Germany. From there, the proliferation of Shropshir sheep in Germany began to a greater extent. Some breeders have carried out consistent breeding selections and have come to a proper breeding stock in their Shropshire sheep. From about the year 2003, several breeding-goats and female. Shropshire sheep from England introduced to Germany in various herd book operations, even with us. For many other breeders, the eyes opened up that the Shropshire from England are a whole lot bigger than the ones we knew so far. For those breeders who had consistent selection from the beginning, the difference in size was not so blatant. Meanwhile, the formerly Danish breeding lines are very mixed with the imported English lines, so it is actually time to talk about our own breeding direction.

Both breeds, Danish and English, have advantages and disadvantages. If we want to take advantage of both, the breeding goal of our Shropshir sheep can only be: correct foundation, straight, firm top line, long, deep hull, strong bones with good muscling, good inside and outside lobes, no yellowish-wool and no pigmentary defects, no overbiter (dentition), pronounced motherliness with good milk yield, cheerful lambs, no horns, no barking in the softwood crops, no peeling of the bark etc .. The head wow is also a typical feature of Shropshire sheep. With too much repression of the wool, the Shropshir sheep also loses some of its special appearance and would be too much like the black headed sheep.

When selecting suitable breeding animals, the criteria / breeding objectives mentioned above must be given greater importance than those of choice between English or Danish breeding direction. The more uniform the breed Shropshire sheep in Germany presents, the more successful we will be able to improve the breed. The to breeding animals u.a. can also be imported from other countries is beyond question.

We use cookies on our website. Some of them are essential for the operation of the site, while others help us to improve this site and the user experience (tracking cookies). You can decide for yourself whether you want to allow cookies or not. Please note that if you reject them, you may not be able to use all the functionalities of the site.